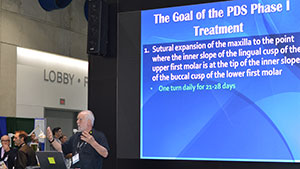 Throughout the weekend, we had an exceptional line up on the main stage. The stage was set with a 10’ x 7’ LED Screen which illuminated the booth and featured information presented by the world renowned Forestadent Lecture Team. Among our main stage presenters were: Dr. Ron Roncone (Vista, CA), Dr. Straty Righellis (Oakland, CA), Dr. Doug Knight (Louisville, KY), Dr. German Puerta (Colombia), Dr. Oscar Palmas (Argentina) & Chris Kabot from EnvisonTec.

During the lectures the attendees enjoyed light snacks accompanied by mojitos and margaritas, while they learned about PhysioDynamics, FACE & the newest trends in 3D Printing.

On Saturday Dr. Ron Roncone discussed the reasons why one should routinely do phase 1 treatment. He covered a few main points:

1. The maxilla is routinely asymmetrical when looked at from front. A fixed Hyrax appliance can fix this when used correctly.
2. The maxilla is almost always more narrow than the mandible. This can also be fixed by use of a Hyrax appliance.
3. Phase 1 greatly assists in increasing airway and correcting maxillary asymmetries.
4. Just under 30% of children in the mixed dentition show signs of degenerative joint disease.

On Sunday Dr. Ron Roncone began the lecture series for the day discussing how the muscles play a very important role in orthodontic treatment. He said, “It’s all about the muscles!” Dr. Roncone discussed the importance of muscles in achieving proper joint position and occlusion. He added that the vast majority of patients suffering from headaches (including migraines) can be helped. The final discussion topic focused on one of the major causes of relapse centers around musculature which is not relaxed.

Dr. Straty Righellis presented a mini lecture of the 3 Whys! He addressed Why self ligation over conventional brackets, Why Forestadent SLB Brackets, and Why FACE Evolution Rx. He outlined why Self Ligation vs. Conventional brackets on the basis of reduced wire-bracket resistance, less chair time to engage wires, and improved hygiene, all based on his cohort studies within his practice. With so many options available, Dr. Righellis described why the Forestadent Self Ligating bracket, based on their performance in his practice. The Forestadent brackets feature a more retentive bracket base, a more durable clip, a new Rx based upon CBCT observations, and a better fit. Finally, he detailed the FACE Evolution bracket with the following important aspects of the prescription, less angulation on all cuspids and cuspids more upright, increased torque on upper molars, upper molars with less anti rotation, and upper molar position can be changed depending upon anchorage requirements.
Dr. Righellis concluded his mini lecture with three case reports demonstrating the same FACE Evolution Rx on three different malocclusions yielding the same clinical outcomes.

Dr. Doug Knight highlighted the advantages of the Hybrid Philosophy using the FACE prescription. Describing his experiences in the past 20 years using both passive and active self-ligating systems, and the positive attributes he found with both systems; the early alignment with the passive system, and the finishing and detailing control with the active system.
He now enjoys the best of both worlds. The Hybrid system allows reduced resistance to friction during the early stages of alignment, leveling, rotational correction and space closure. In later stages of treatment, when the archwire size increases, so does the resistance to sliding (RS). This provides better three dimensional control, full in and out torque for ideal root and crown positioning. Hybrid gives the practitioner the best combination of low friction and control, during all phases of treatment without the need for alternative mechanics or auxiliaries.

Chris Kabot from EnvisionTec provided an overview of the newest trends in 3D printing. The new Micro Plus was available in the booth for demonstration after the lecture.

This site uses cookies. If you continue to remain on the site, you agree to our use of cookies.

Thank you for visiting our website. While we are offering our products around the globe, the availablility of certain products may differ from market to market.

Either the language preference of your system or the link you followed has matched you to the US market.
You can now choose to continue browsing the US market site or change over to our international site in English.

Continue browsing the US market site

Go to the international site